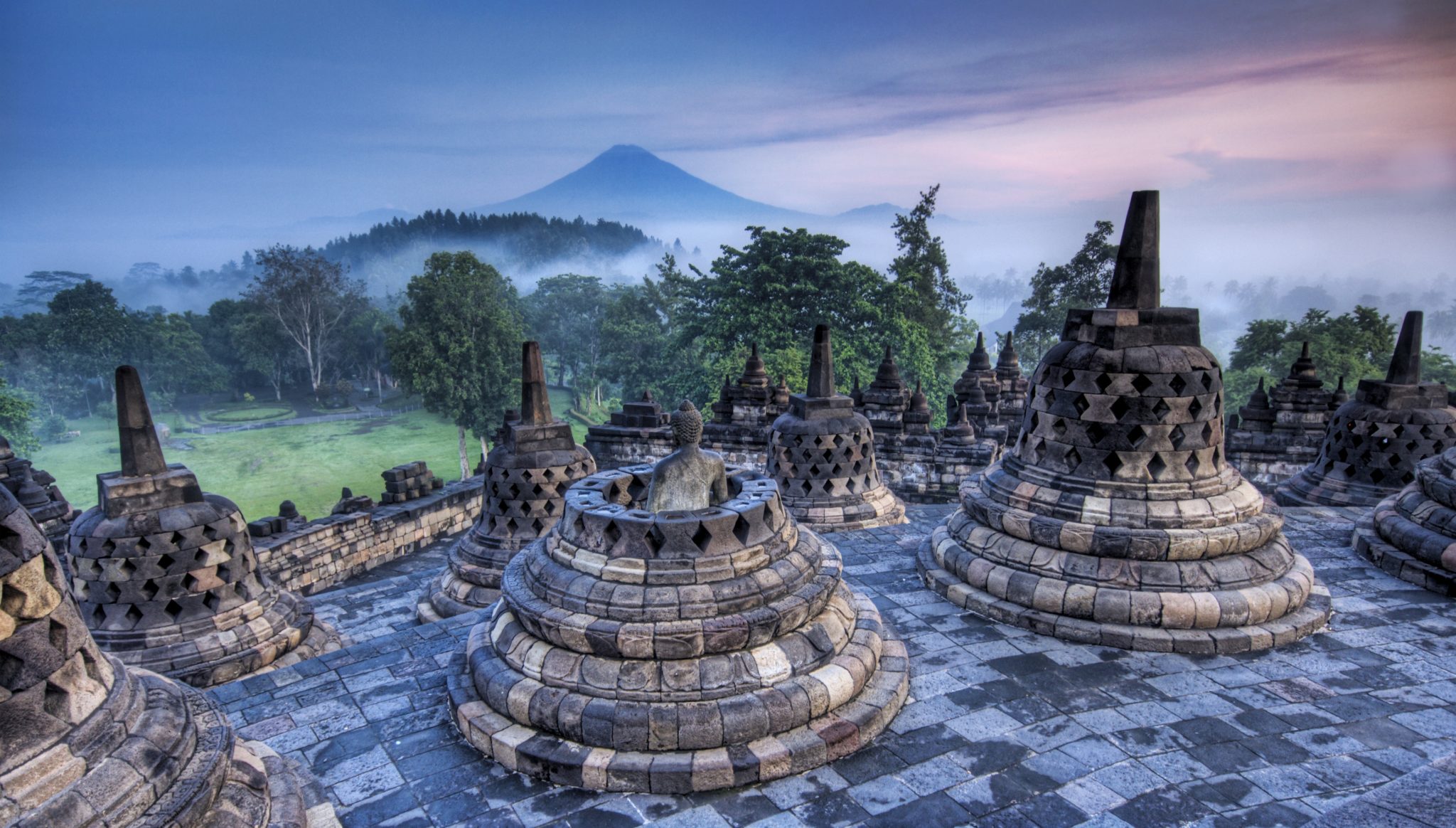 I start every blog the same. You’d think i’d learn by now. DO SOME RESEARCH BEFORE TRAVELLING!!

I got a whole heap of information from other friends that had travelled to Borobodur so I thought I was well equipped.

Pete’s parents had made the trip to Jakarta and we decided that Borobudur would be a great place to go with them.

We opted to stay a few minutes out of town at the D’Omah Hotel. It had been recommended by a friend who had stayed there and we were extremely happy with it. The boutique hotel was set in a gorgeous little village. The rooms were comfy and we had a room right next to the pool. The restaurant overlooked rice fields and we were lucky enough to see harvesting and planting while we were there.

We didn’t have a great deal of spare time as we were only there for a long weekend. We arrived late on the Friday so we went for a walk around the local village. The people (as always) were so lovely and accommodating. We had a swim and a Bintang then to the restaurant for dinner.

I had done a little bit of research about photographing the temple and I got a couple of good photos but…. there are thousands of people at the sunrise viewing! I mean thousands! It’s almost impossible to get a photograph without anyone else in it! And nobody is courteous of others! I was so stressed out by the time the sun had risen because I was so worried about getting a good shot and nothing was turning out how I’d planned. Upon reflection, the photos I got were great for my level of experience. I guess I was just expecting to get that amaxing shot that you see in magazines.

We were talked into getting a tour guide to show us around once the sun was up. This isn’t something we would normally do but seeing as though we had guests, we obliged this time. We were pleasantly surprised on this occasion. Sonny was a big indonesian man and boy was he good at his job. Not only did he keep us entertained with amazing stories of the inscriptions in the wall, he was also hilarious, honest and a great photgrapher. On more than one occasion, he encouraged me to take photos of angles I never would have thought of, and even got me in front of the camera for some fun shots!

Once I took a step back and stopped trying to get that amazing photo and started living in the moment and creating memories that will hopefully last me a long time, did I realised how breathtaking Borobudur really is. Built by hand, there are so many stories carved into the walls. So much history. Stories of men and women, children and animals. Before Facebook and Instagram when the world lived on tales of gods and mystical creatures. It is wonderful to imagine a world where all of this existed. It’s a place where tales of great triumph or unimaginable heartache will be written in the walls for hundreds of thousands of years to come. A place that will hopefully be protected and remain unchanged for generations to come.

Once we had a good look around with Sonny, we headed toward the exit. Before we left Sonny asked if we wanted any souveiers at all. We all said no so he told us, no matter how much the people in the next section offer you, just ignore them and keep walking. We didn’t really take him to seriously until we got to the bottom. There were only about 10 vendors but they heckled us hard! It was about a 30m walk through the area and boy was it full on!

Once at the bottom there was coffee, tea and morning tea provided. The others had a coffee and we hit the road for the trek home. On the way home we asked our driver to take us to any other spots he thought we might enjoy. It is common practice for drivers to take you to places that pay them a commission. Tea houses, temples etc. We made a stop at one more temple and directly across the road was a coffee house. Luwak coffee is very popluar in Indonesia. Luwak coffee is somewhat of a ‘treat’ here in Australia, with some cups worth $50. A Luwak is a possum/cat type of animal. Luwak coffee beans are made from the faeces of this animal. Yep. Possum poo coffee. I don’t drink coffee so I can’t attest to its taste, but by all accounts it was nice.

Borobudur and Yogyakarta was last modified: November 13th, 2019 by jodiemellor